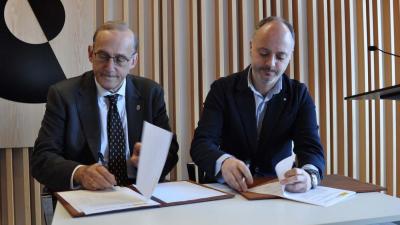 Manuel Reigosa, Rector of the University of Vigo, and David Regades, Delegate of the Vigo Free Zone Consortium, signed yesterday an extension of the ARDÁN Chair, an agreement that both institutions maintain since 2018, which will mean an increase in the budget, reaching € 150,000. This agreement, promoted by ECOBAS, serves as a framework for carrying out works such as the ARDÁN Report, a study published annually that contains several chapters in which relevant aspects of the organization and operation of Galician companies are analyzed, such as competitiveness, innovation capacity, internationalization, the degree of circularity or gender equality.

Thanks to this extension of the Chair, ECOBAS will be able to work on a new talent management indicator, which will assess the ability of Galician companies to train, motivate and attract qualified personnel. In addition, the budget increase will also serve for the design of an online tool on gender equality which will allow companies to know their situation, and will give them the necessary information to make decisions when implementing improvement measures.
﻿ SUSCRIBE TO ECOBAS