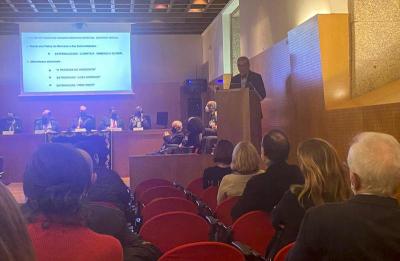 Wednesday, 15 December, Santiago de Compostela
Professor Alberto Gago Rodríguez was sworn in as a Full Member of the Royal Galician Academy of Sciences this afternoon at the Pazo de San Roque in Santiago de Compostela.
Gago gave his entrance speech to the RAGC with a report entitled "Economy, Climate Change and Public Policies", in which he highlights the role of research in a problem as important as global warming. "Climate change is a phenomenon well analyzed by the natural sciences. But to this traditional approach, Economics adds research on adaptation and mitigation policies and the mechanisms and instruments that can be used to bring about a change in the behavior of economic agents", said the former rector of UVigo.
Biography (source: University of Vigo)
﻿ SUSCRIBE TO ECOBAS