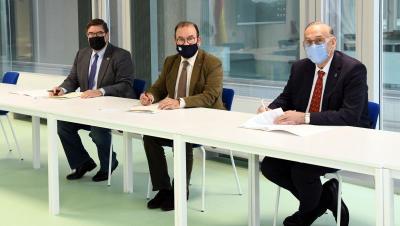 The rectors of the three Galician universities, Julio E. Abalde, Antonio López Díaz and Manuel Reigosa, met this Tuesday, December 7, in the Fontán Building of the City of Culture to sign, among others, the collaboration agreement that makes official the commitment of the university institutions with the ECOBAS Research Center.
The next step for the center will be a coordinated call for the assignment of new research personnel by the research vice-rectorships of the three universities.
ECOBAS is currently undergoing a process of change from working as a Strategic Grouping to functioning as an Interuniversity Research Center. Among the most notable changes is the process of affiliation, in which an external committee will evaluate the researchers of the three Galician universities that want to be part of ECOBAS.
Photograph: Santi Alvite
﻿ SUSCRIBE TO ECOBAS