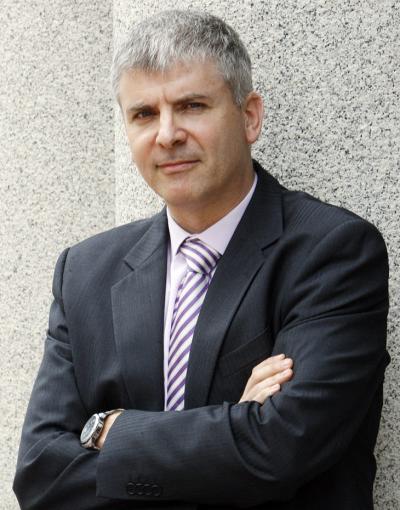 Santiago Lago Peñas, Economics Professor at the University of Vigo, director of the research group GEN and the Galician Economic Forum and member of ECOBAS, considers that the keys to recovery are on respect for public and occupational health measures, political and social dialogue and in appropriate economic plans.

"It is a time of generosity and cooperation, of loyalty and mutual respect and of seeking elements of agreement"

Professor Santiago Lago, who participated as coordinator in the committee of experts created by the Galician Regional Government for the recovery of economic activity after the Covid-19 crisis, is optimistic about the recovery, but he warns of the need for joint work among all the actors involved.

The Economic Forum of Galicia, led by Santiago Lago and with the help of José María Da Rocha, has designed three possible scenarios to get out of the crisis. "The first, the one we want and consider the most likely, involves a very substantial fall in gross domestic product (GDP) in 2020 as a whole (-8.5%), but also a gradual recovery from the second half of the year; and it would allow us by 2022 to reach the level with which we ended 2019. The second, which is not disposable, is that reactivation will be more difficult. If the measures of distance, the limitation of capacity, the loss of confidence, etc. throw sandbags on the wheels of large economic mill, we would approach the -13%. The third, most hypothetical, is that we have to go back to lockdown, as we did in the third trimester. In this case, we would approach -19%. Taking this into account, the dynamization and normalization that begins now must pivot in three essential elements. The first: maximum respect for public and occupational health measures. The worst that can happen to us is to return to the lockdown. The OMS has warned this and Galicia figures confirm this. The second: smart and accurate economic plans, well implemented, that sequentially solve the extraordinary challenges that lie ahead to prevent short-term problems from becoming structural. The third: political and social dialogue to find solutions that share costs in a reasonable and equitable way, to focus on the important, to work together, explains the professor.

Galicia’s industrial structure is solid. The weight of its industry in the whole of Spanish (5.8%) is clearly superior to the overall weight of the Galician economy (5.2%). In particular, Galician industry produces 11% more than our economic size. We are industrial. The result is a consequence of what has happened in the last two decades", he says. Despite having a lower visibility, Galician industry is one of the economies that has grown the most on the regional map since 2000; more than the "industrialists" Catalonia and the Basque Country. Behind this positive result are large companies such as Inditex and Citroën, but also many other companies from the four provinces, almost all of them family-owned with recognized surnames. " Undoubtedly, we have industrial companies in crisis and with problems; some of them create enormous challenges on a regional scale. But also we have others that today are much stronger than there are ten or twenty years".

Tourism, hospitality, culture and leisure sectors will be the most affected by the crisis

After the initial lockdown, many companies have been able to resume their activities and their situation is now fairly normal. The problem now lies in the branches and companies in which the new rules of social distancing have a full impact on them (tourism, hospitality, culture and leisure, sport...). "They are an important part of our economy, and if these sectors are half-way or unemployed, they affect the whole," says Professor Lago.

"ERTE is a good solution for dealing with the effects of the abrupt interruption of economic activity. In fact, what we are discussing now is in what branches and companies and even when to extend them. As far as the living minimum is concerned, it was a programme that was already planned and that the crisis accelerated. It is also moving in the right direction, although there are concerns about the effects on the black economy and the disincentive to work. We will have to be very vigilant and adjust the IMV to the observed reality".

The committee of experts of the Xunta has been searching for formulas and proposals for the recovery, some of the measures they have proposed can be seen in the following report: http://www.conselleriadefacenda.es/documents/10433/26507679/Informe-Completo-gal.pdf/d93ea3c4-6223-463a-9204-dff293a641db.

“Public debt is not so much the tool as the consequence of supporting the whole system with public money so that it does not collapse. I don’t think that at this moment the growth of the deficit or the debt should be the thing that worries us the most. It’s inevitable. And as for the concrete measures to be taken, what some consider heterodoxy and anathema is simply inevitable: temporary and ad hoc nationalizations are now within reasonable options", the economist confirms.

Santiago Lago also says that Spain is in a very bad fiscal position, and we will have to rely on community support to get out of the crisis. "We are one of the countries in the European Union with the least fiscal space because of our high public debt and the large structural deficit that we carry. If in the 2009 crisis we were one of the most proactive countries in the world in the fiscal field, today we are among the least in the European Union. Germany, for example, is being much more active.

Given the controversy caused by the lack of european support in the first weeks of the pandemic, the professor believes that we all have our share of blame for the lack of understanding. "The preferences on fiscal stability are different in different European countries and there is no concept of European citizenship that supports the flows of inter-territorial solidarity that exist within countries, as we analyze in this article published together with Albino Prada and Alberto Vaquero in 2015. It is true that this is an extraordinary problem and that it is in the interests of the whole of the European Union (and also of the Netherlands) to apply strong fiscal incentives throughout the Union. However, we Spaniards also have to understand that we cannot maintain a structural deficit of 3% indefinitely and take the fulfilment of fiscal objectives seriously".

"We are in uncharted territory"

Like any economic crisis, this situation will lead to a worsening of working and business conditions. We cannot compare it to any previous economic crisis because of its intensity and origin. Professor Lago stresses that this is the first time in history that the economy has stalled for several weeks and then started with changes in the rules of social interaction.

"Undoubtedly, betting on globalization in the traffic of capital, people and goods and not in the field of policies (public health, environment, security...) is a symmetry that would sooner or later take its toll on us. I am confident that the crisis will serve to strengthen an institutional framework that can deal with global public goods. As far as we are concerned more urgently at the moment: we need multilateral bodies with much more resources and powers; as a capacity to decide to close state borders to control the outbreak of a pandemic", says Professor Lago.
﻿ SUSCRIBE TO ECOBAS