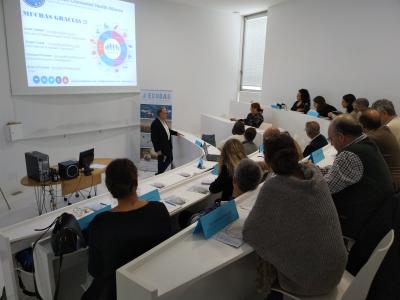 Joan Cornet, from ECHAlliance organization, visited yesterday the School of Economics and Business Administration of Vigo in the framework of a conference on digital transformation in the field of health. In addition to ECOBAS members, the meeting was attended by the Head of the Galicia Sur Biomedical Foundation Beatriz Gil de Araújo, and other members of this organization; the manager of the Vigo Convention Bureau, Belén Vallina; and professionals from the Galician Health Service and other organizations related to health, economy and business.

Cornet, who currently runs the Digital Health Observatory, has a long professional career in different organizations: he worked for more than 15 years in the European Commission and in the European Parliament, was General Director of the Generalitat de Catalunya Health Department, launched BIOCAT, was director of TicSalut Foundation, and directed the mHealth, created under the Mobile World Capital Barcelona.

During the meeting held yesterday, he shared with the attendees his vision on the challenges that society is going to face due to the changes that digital technology is producing in the health sector. He also explained the role that organizations such as ECHAlliance can play to address these challenges, and participated in a round table in which all attendees had the opportunity to discuss and share their views and experiences on the subject.
﻿ SUSCRIBE TO ECOBAS