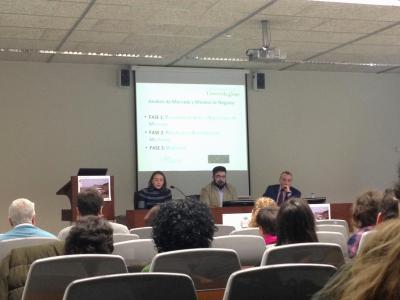 Kick-off of the project “LitterDrone”, that counts on the participation of the iMark group

Last Thursday, the project LitterDrone (Development and Exploitation of Innovative Tools for Remote Marine Litter Control and Management through UAVS), funded under the last European “BlueLabs” call, was presented at the School of Telecommunication Engineering of the Campus of Vigo. The President of the University of Vigo, Salustiano Mato, opened the event and highlighted in his speech the importance of this type of collaborative projects and the great success achieved by the University of Vigo, as three of the four proposals submitted by the UVigo to this call were selected among the fifty presented

LitterDrone focuses on the problem of garbage existing in coastal areas, coming from the oceans due to human activity, and it aims to develop a system for locating, classifying and characterizing waste by using unmanned aerial vehicles (UAVS), commonly known as drones.

This initiative will last two years, with a budget of €390.000, and is led by the University of Vigo, specifically by the Image Processing and Virtual Reality Group (GPI-RV), with participation of the ECOBAS iMark Group, which will be responsible for studying the business model of the technology arising a result of the project. In addition to these groups, the company of topographic material Grafinta, and the Spanish Association of Marine Litter (AEBAM) complete the consortium.