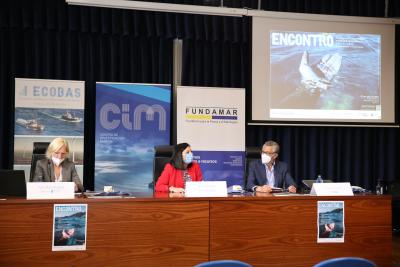 ECOBAS, CIM and FUNDAMAR start the joint activities that will be implemented in the collaboration framework agreement signed between the three entities

This Thursday took place the event, 'Responsible research and innovation in the Galician R+D+i Ecosystem. Practical example in the marine field', which could be followed live through the UVigoTV platform, and that marks the starting point for a program of joint activities between the Mariña Research Center (CIM), ECOBAS, and the Foundation for Fisheries and Shellfish (FUNDAMAR).
These activities are framed in the collaboration agreement signed between the three entities, which was presented yesterday, for the implementation of joint activities that promote scientific and technological development and the practical application of knowledge for the benefit of society. The presentation of this four-year agreement was made by the Vice-rector of Research, Belén Rubio, the president of Fundamar, Javier Touza, and the director of CETMAR, Paloma Rueda, and the closing of the event was made by the Regional Minister of Employment and Equality, María Jesús Lorenzana.
The central theme of the meeting was Responsible Research and Innovation, known as RRI for its acronym in English, and had the reports of the R & D technician of the International Projects Office of UVigo, Anxo Moreira, and the Starting Grant researcher of ECOBAS, Mario Pansera, who shared with the audience their analysis and views on this concept. Both insisted on the need to bring social agents closer to the scientific community so that citizens, the economic and social fabric and the administration are increasingly involved in a pact that allows "democratizing the decision-making process on science and innovation", in Pansera´s words.
﻿ SUSCRIBE TO ECOBAS