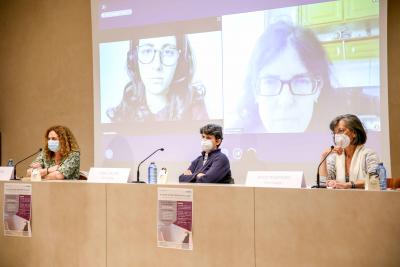 About 30 people attend to the talk organized by ECOBAS the past Friday at “Museo do Mar” entitled “Science has a woman´s name”. Due to COVID restrictions it was mandatory to have a previous invitation but even though, most of them were on spot a lot of people were attending online.

The Director of the “Unidade de Igualdade da Universidade de Vigo”, Águeda Gómez was the host and Manuel Vicente, Director of “Efervescenciencia”, was the moderator. Most of the audience of this radio broadcast could follow the speeches live from UVigo TV.

They were five investigators speaking, Coral del Río, María Loureiro e Rocío Rodríguez were the speakers on spot and Amaia Palencia and Enma Iglesias were online. The speak about women´s issues in the scientific field and how women were most affected by the pandemic than men. The audience take part with their questions and at the end they could enjoy a small live concert played by the group called High Paw.

This event served ECOBAS to approach some of their projects gender related to society.
﻿ SUSCRIBE TO ECOBAS