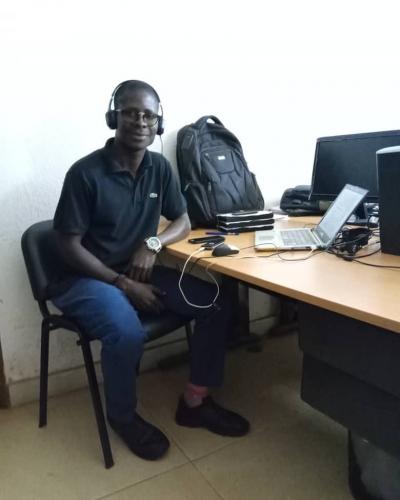 The Galician economist Brais Álvarez Pereira launched a fundraising campaign on the GoFundMe platform to get his friend Jair Fernandes to enter the Master in Economics with which ECOBAS collaborates and come to study in Vigo.

The Guinean student was accepted into the course but did not have the necessary funds to finance the tuition and his stay in Vigo, around 10.000 euros, so the initiative arose. It has been a few days since they started the petition but they already have almost 8.000€ contributed in different amounts by benefactors from all over the world.

The friendship between Jair and Brais arose between 2016 and 2018, during which time the Galician worked as economist for the Ministry of Economy and Finance in Guinea-Bissau. In 2018, Brais founded a small socio-economic research center, the Bissau Economics Laboratory (BELAB). For the first project he had the support of Jair as the main research assistant, on the recommendation of different colleagues. "Jair impressed me from day one with his motivation and dedication to the project. His effectiveness became the key to the success of the initiative. Jair has great determination and strength, and the main objective of all his efforts is to contribute to the progress of his country. From that experience, we establish a solid and lasting professional collaboration and a friendship of those that are for life", explains the economist.

An original idea that bore fruit in a short time

"The idea of one day getting Jair to study in Europe enlightened me a few days after meeting him, as soon as I saw how hard he was working on the project we were working on together, and his continuing passion for learning and building an academic career, despite all the difficulties he had to face in order to study economics. The idea of crowdfunding came to Lucía Soldá, another campaign organizers. Seeing that the possibility of being accepted in a good master’s degree was open, finding funding and preparing their documents before the start of the master’s degree was the next big challenge", explains the young man.

Motivations to study the Master in Economics at UVigo

Jair had a preference to study in Galicia and study this Master for several reasons. The first is the tongue. Although he understands Spanish and Galician well, Jair does not have official certificates in these languages, and living in Guinea-Bissau it would not be automatic to get them. The fact that the language requirements imposed on foreign students are not required for people from Portuguese-speaking countries opened the door for him to consider Vigo as an option. The choice of the Master in Economics of the Inter-university System of Galicia was due in particular to its quality of excellence for the preparation of an academic career, the first priority of Jair. "We spoke about the different possibilities within the UVigo, and Jair liked the content of two other programs, but we agreed that the most opportune thing was to face the challenge of a master’s degree that prepares it technically and methodologically for cutting-edge research in economics. In terms of helping him in his career, it’s hard to understand how much difference it makes, in a country like Guinea-Bissau, to have a prestigious and quality master’s degree from a European university, and much more a doctorate", explains Brais.

Jair is completely determined to learn as much as possible, and his priority is an academic career. If, after the master’s degree, he obtained acceptance and financial support for a doctorate, he could continue his training at the University of Vigo. "Now that he has received this support from the Galician society surely the prospect of continuing his education here is very attractive to him. He is totally convinced of wanting to develop his professional career in Guinea-Bissau, but like all international experiences, who knows if one day his work contributes to unite Guinea-Bissau and Galicia or Europe, working in both lands".

Jair will arrive in Vigo on September 19 with a lot of enthusiasm and gratitude, since the campaign started only a few days ago already has almost 8,000 euros. The estimated budget, attached on the platform, is 9.980 euros. A figure that will be used to pay for university tuition, accommodation, food, transport, health insurance for 12 months, the return trip to Bissau and visa documents. You can also contribute by making a donation at this link.

From ECOBAS we are very grateful to all the people who were part of this initiative and participated in the financing, and we hope that Jair will have a pleasant stay in our country. We will try to help him in everything that it is in our hands. Congratulations for everything achieved, the effort was worth it!
﻿ SUSCRIBE TO ECOBAS